GET A FREE QUOTE

Open your view to the world – choose glass railings!

Glass railings are an elegant solution for your space whether you are using them for your stairs, deck, balcony, as decorative items or somewhere else. Besides the beautiful aesthetic, opting for glass is a choice that is secure and long-lasting.

Most regular railings consist of a durable glass panel with aluminum support and a horizontal rail on top.By virtue of advanced technologies used by Railings Toronto, we are able to provide our clients with customized railings design that will fit your space perfectly.

Despite the railings’ simple structure you can still make them unique. Here are some options that you might consider when customizing your railings:

Glass railings are becoming a more and more popular option for balconies due to their main advantage – the unobstructed view. Nevertheless, the most common question still stands: is this transparency going to last? Due to a special hydrophobic surface that keeps them safe from the weather, glass railings almost require no maintenance except occasional cleaning with a squeegee, soap and water.
The aluminum parts of a glass railing are covered with free-flowing powder coating, which makes the metal harder, more resistant to wear and prevents them from corroding.

Railing Toronto uses tempered glass which is four times stronger than the ordinary glass panes used for windows and doors. In the event that the glass is broken it will fracture into small piece, minimizing the risk of injury. In other words, if you have small children who love to make your home into a soccer field tempered glass railings are a perfect choice for you.

Call Us Today For A Free Estimate

If you are looking for a glass railing professional in Toronto or the GTA, give Railing Toronto a call. We are a proud subdivision of PRO WELD specializing in customized glass railing solution. Whether you are working on a residential or commercial project – we are here for you.

Give us a call today for a free consultation.

RELATED ARTICLE: Why You Should Install Glass Railings? 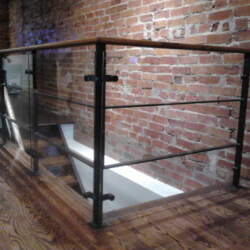 Inquire about this product today

Please fill out the form below to inquire about this product.